If you’ve been into a game store lately or looked on Amazon for fun party games it can be a bit overwhelming.

There are so many new games arriving on the shelves all the time. How do you know which ones will deliver the fun times you seek?

And what if you show up to the party with a dud?

To make your life easier we’ve put together this list of games we think most people will want to play and compared them to the awesomeness that is Song Saga.

So many fun party games for adults, but can any of them beat the green box that rocks?

Not because we don’t love it, we do. In fact, CAH arguably spawned a whole new interest in fun party games for adults, and the entire industry probably owes them a debt of gratitude.

If you haven’t played it, and you’re a horrible person, then you should.

Here is our list of the most fun party games (2020) you can play to enjoy more quality time with friends.

In no particular order:

If you can’t already tell, we love music around here. And we love an impromptu boogie too.

We think one of the most fun things you can do is have a dance party at home, and best of all they’re free.

What you might not already know is living room dancing and DJ’ing is part of the origin story for Song Saga.

It is if you make it a competition to see who can play the best songs and keep everyone moving and grooving.

Take turns playing songs. If someone plays a great song, they get to play a second song, but if they play a dud, they lose their turn and the next DJ is up.

This also puts some structure to things so you don’t have that situation where everyone is fighting to play a song and cutting off other people’s songs before it even ends.

Give it a try. Get your groove on and see why we think this idea is one of the best party games for adult without props.

What Do You Meme?

These guys did it right. They built up a massive following on Instagram and then started putting out game after game. This one is a modern classic for our times.

It’s very similar to Cards Against Humanity. It can be almost as rude, gross, weird and funny, but within the context of an internet vibe.

It’s good for a laugh for sure, but compared to Song Saga you won’t really discover things about your friends, other than what they think is funny.

And you definitely won’t discover any new music.

We could tell you why we like this spy game, but then we’d have to kill you.

What we can say is, other than using cards, it has nothing in common with Song Saga. No music. No stories. Just deadly assassins.

Don’t say we didn’t warn you.

To be honest we don’t get this game. But so many people love it we were afraid that if we left it off this list we wouldn’t be taken seriously.

We have a copy and we never play it. Maybe it’s just us.

That said, we do love the illustrations, and their ability to leverage an existing audience (The Oatmeal) and convert them into game buyers is to be applauded.

Are we playing it wrong? Have you played it and loved it? Hit us up in the comments.

You can’t spend your whole life indoors. But if the backyard is far as you can go, or want to go, then Finska is great.

Compared to Song Saga? Well, you can play music and talk shit while you play Finska so they have that in common. But that’s about it.

If you want a slightly safer experience and the idea of taking a musical trip down memory lane seems fun, you can’t beat Song Saga.

And as long as it isn’t too windy and you have a portable speaker, you can play it outdoors too.

We had to add it. We know it’s not for everyone, but so far it’s been a fun party game for everyone we know.

Cards Against Humanity and Song Saga have a few things in common:

But as one game reviewer said, “Song Saga is like Cards Against Humanity, but I can play with my kids.”

Which is true, and is part of the reason we created the Pinky Promise NDA card – so you can keep your secrets safe.

So that’s our list of fun party games for adults. Thanks for playing along. If you have a game you love you think we should know about hit us up in the comments. 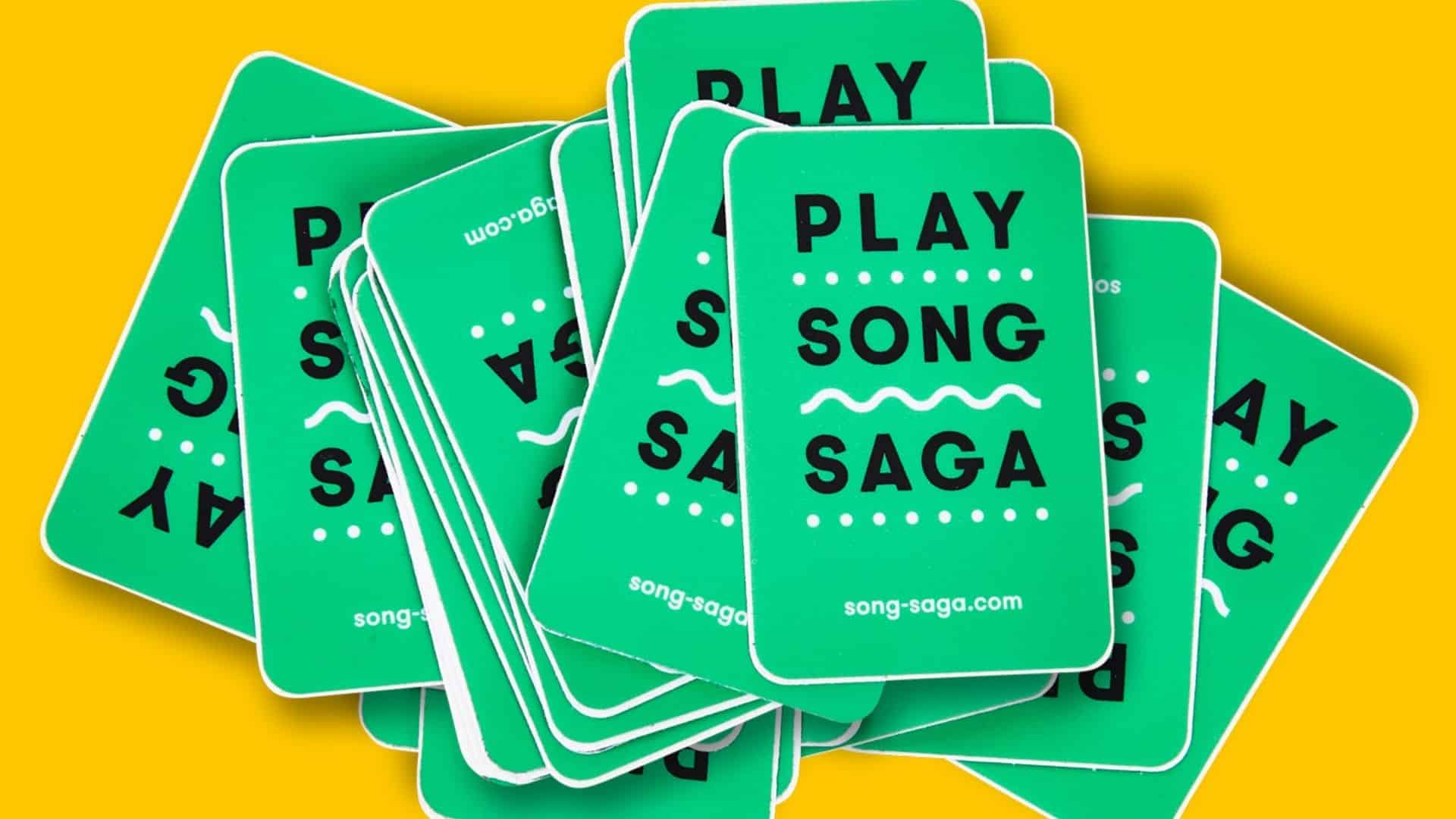